The Spiritual Side of My Life

Many people over the years have asked me how I knew I was psychic and how I developed my gifts of clairvoyance and healing.

It is not something, in my experience, that suddenly happens, it sort of crept up on me and I found myself experiencing strange coincidences, intuitions and thoughts which made me starting questioning. 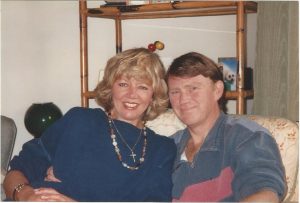 I remember one day, when I was in my teens still living at home, a gypsy came to the door selling heather, as they do.  I could not resist wanting to hear what she had to say so paid her for a bunch of heather. One thing that sticks out in my mind is, she told me I would buy a little blue car (couldn´t drive at the time) and I would drive all over the country working.  It was some years later, having forgotten all about this gypsy, that I bought my first car, a blue mini and drove all over the UK working as an actress.

Another incident happened.  I went to see a psychic tarot reader called Isis for a sitting.  During the sitting she told me that I would be an actress and would get a part in something which was successful.  I would take over a part from a girl that was leaving and the public would accept.  I really thought she was making all this up as I was working as a shorthand typist at the time and had no thoughts about acting.  It came true.  I took over from Penny Spencer as the new Sharon in the film “Please Sir” going on to make many episodes of “The Fenn Street Gang” and the public did accept me as Sharon.

With various other experiences I started to ask myself questions, “What am I doing here?”  “Why am I here?” “What is this life all about?”  I just couldn´t accept that we are born, go through all experiences of learning, relationships, pain, working and so on, just to die and that is the end of it.  “What is the point” I thought.

I used to gaze at the stars and planets and wonder what else what out there.  Surely man cannot be so arrogant to think he is the only living being or form of life on a planet, when there are so many many out there, some not even discovered yet.  So why could there not be another kind of existence when we die?

Through a series of events I was led to a group of people who believed in life after death and thought it possible to develop an awareness of the life unseen to the naked eye and in turn, tune into this life force for knowledge, guidance, healing and understanding of ourselves and life. 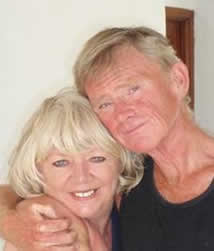 I have sat with many groups over the years developing my awareness and trying to get some sort of understanding of life, in its many forms as we know it, humans, animals, plants and planet earth, let alone anything else we are unaware of.  Along with my acting career I have worked for many years as a healer/counsellor and clairvoyant medium, holding group meetings with my husband Martyn Padbury, who is a healer, medium and trance medium.

I have found, over the years, that with using these gifts it has brought so much comfort and healing of the mind, body and Spirit to people. There are many forms of healing and little did I know that I had been involved with one aspect of healing without knowing, the healing with laughter with all the comedy shows I have worked in.  For people to laugh and forget their worries for a short period of time, takes them away for a while and healing can take place.

I remember that whilst filming an episode of El Cid in Spain I was used for healing.  Trevor Byefield and Kenneth Cranham and I went to a local bar for supper after filming.  Trevor had a really bad back and the production company had called in a doctor to help him but he was still in a lot of pain.  Whilst in the bar I told Trevor what I did and I suggested I just put my hands on his back and see if any help could be given.  Within minutes he said he felt my hands were like an electric fire, heat is often experienced with healing.  They were not really the right conditions for healing to take place but it worked and relief was given.  It must have been reported in a newspaper, I cannot remember now, but we were both invited to go on Richard and Judy show to talk of the incident.

I know there are many people who do not believe in an afterlife but there are thousands of people who flock to demonstrations of mediumship, buy thousands of books on the subject including self help, visit mediums, tarot card readers, visit healers, go to retreats for some sort of help with their daily lives or bereavement.  There is a need for a more open way of thinking about life. 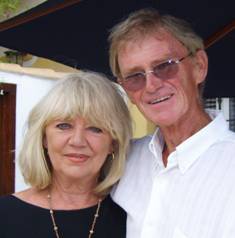 There are a lot of centres and mediums out there now and people are opening up their minds to the possibility that when we die it is not the end.  OK some are grieving so much for a loved one, they want to believe they still exist, but there has been so much evidence of survival and comfort derived from this.

The healing that is taking place is wonderful and who cares how this healing comes about if it helps the person in whatever way.

Each person has their own belief systems, there are many roads home so to speak.  Just because we cannot see something tangible, does not mean it is not there.  Think of the new planets discovered, think of the universes we are still unaware of, what are they doing there, what reason are they there.

Think of your senses and how they operate, your intuition, insights, thoughts, actions, knowing something is going to happen, why do we have these senses, must be a reason.  I could go on and on about all this.

I feel this earth plane is rather a horrible place to be living, although our Spirit Guides have suggested it is the best learning school in life.  When you think of what man is doing with greed to each other, the animal kingdom, plant life and the planet is appalling.

I feel man should try to live their lives as best they can with their circumstances, bearing others and other life forms in mind, learning by so called mistakes and thought forms and try to make improvements within oneself.   It is so easy to judge others but first we need to look at ourselves.  An old Indian proverb “ Never judge another man, until you have walked a mile in his moccasins”.

These are some of my thoughts on this vast subject, I have seen the help a different way of thinking has changed and helped peoples lives.  I no longer work in this field unless a situation arises.